Dating these days is like something out of a made-for-TV Halloween special. When we’re coupled off, we have our “boo.” And when we want to extricate ourselves from something perhaps in need of an exorcist, we ghost.

Over the summer and again in November, the New York Times committed a good amount of print space to the act of ghosting, or the childish act adopted by grown-ups of giving someone the silent treatment… permanently. But as any Millennial and older knows, if by the time you’re 30 you haven’t been ghosted by someone you’re dating and/or ghosted someone you’re dating, then you haven’t really dated.

The November New York Times Modern Love piece on ghosting followed the progressing mental stages of a woman who had just been ghosted by a guy she had been seeing for two weeks. I couldn’t entirely tell to what degree the piece was satirical (two weeks? And she’s flipping out? I don’t even add a guy into my contacts until week four, let alone make an emotional investment at two… especially in this age of the disappearing boo…. jeeeez). But her piece made the point that the silence forced on us by the ghoster is a trigger. We look in the mirror and ask, “What’s wrong with me?” And then we find 1,005 answers (some valid, some hogwash) to that question.

When I was a tween, I had a crush on Casper the Friendly Ghost (well, I had a crush on Devon Sawa, to be clear.) But as an “adult,” being Caspered isn’t so friendly. Being ghosted is just like any other kind of break-up — it can lead us to believe we are unloveable.

Being ghosted by someone we’ve just started dating is highly insulting and yet, when there’s no relationship to break-up from, sometimes it really is the most humane way to end it. Like ripping off the band aid, or a single shot to the head.

When he or she just isn’t that into you, sometimes silence is the clearest and kindest message. Sometimes there just isn’t much to explain — this thing just doesn’t feel right.

“Thanks for your voice message,” Chris said to me in a text. “Most people don’t show that kind of courtesy. Maybe we can be friends?”

Chris is a guy I had a handful of working day midday dates with. I was just out of a long term relationship. He worked in a building a 5 minute jaunt from my office and lived in a rented house 15 minutes from where I lived. He liked outdoor things and to read books, real books as opposed to a Kindle. Sometimes, we ran into each other in the Wednesday Farmers Market. When we sat down to lunch or a coffee break, it was a pleasant hour or so. But when we parted ways, I just didn’t feel it. He sent me a text to plan a second “real” date. I called him to say, thanks, but I wasn’t ready to start dating again. A partial lie — had he been a little different, had things felt a little different, I would have been ready to date again.

“Yes. You can never have a shortage of good friends!”

“Great. How about friends who make-out. You have gorgeous lips.”

Chris and I never hung out again. But not because someone pulled a disappearing act. We wanted different things and paid each other the courtesy of sharing that fact.

But had I ghosted him, would he have been surprised or hurt? Probably not. It wasn’t a relationship. It was a few public sightings, exchanges, and some dates.

Ghosting a friend? That should be a one-way ticket straight to hell.

Because here’s the thing: Once you have a measurable past with someone, they deserve to know that you don’t want to have a present or future with them.

You can leave out The Why, because The Why is only important if you want to try to fix things. But tell them good-bye. Friends and girlfriends/boyfriends have earned certain rights, and one of them is the courtesy of a break-up.

Even a post-it note break-up is better than a ghosting. 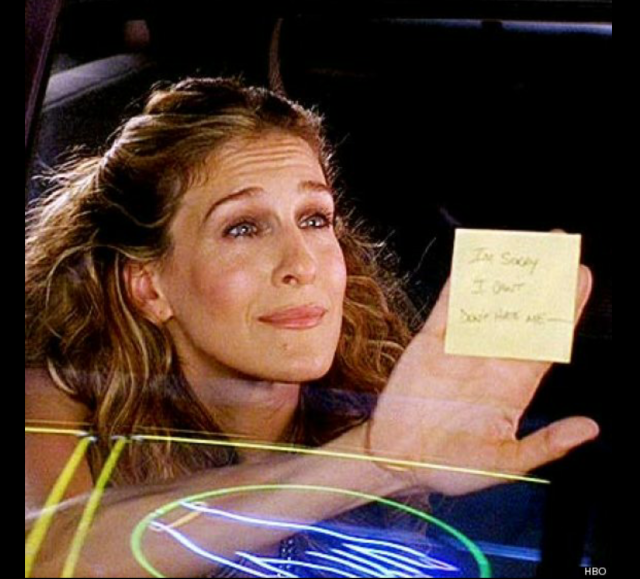