“Why would you want to add a tattoo to that perfect skin? You’re beautiful just the way you are. Besides, you already have this…”

The Admiral ran a finger over a small candy-cane shaped cluster of freckles on my arm. It’s not a marking you’ll readily notice, but it’s a distinguishing feature — my birth-given tattoo, courtesy of god’s (or whoever’s) henna-inked pin-pricks.

Then he added: “I hate tattoos, especially on women. It’s almost a deal breaker.”

I had just shared that I had wanted a bit of ink since I was a teenager. Something small and meaningful. It was an inevitability, I just hadn’t all the way settled on what and where. He was clearly less enthused, and while I appreciated the compliment, I was less keen on the attempted coercion. (When the Admiral and I broke up, one of the first things I did as a purge was cut my hair short because he liked my hair long. His need for dominance brought out the insubordinate in me.)

Two years later, I was dating Chris, a muscle-bound, bearded guy I met at my gym. Like oh, so many New York/Long Island/Westchester bred late 20-somethings, Chris had tats you could see… and several you couldn’t. He was a soft-spoken physiotherapist who liked the outdoors, adored his sister, and played an acoustic guitar. The elaborate ink, including a large inscription across his chest, which peeked out from under his workout wife-beater seemed in total contradiction to his mild-mannered ways. The tattoos were among his most attractive qualities — it suggested a little bad boy behind a teddy bear exterior.

Our first date was at a craft-beer gastropub on the Hudson River. Our waitress, a tall, slim alabaster-skinned woman with jet black hair restrained in long braids a la Bo Derek, had more than a few tattoos emerging from every corner of her outfit — stars creeping up her neck, roses growing down her arm onto her hand, a flock of swallows on her shoulder blade.

I could tell he was fascinated.

“Yea, I mean, I like women with ink,” he said when I asked. “I have ink. I think it’s sexy. It makes you different, and I like different. Have you ever thought of getting a tattoo?”

Well, actually… now that you mention it, I had this one idea…

When I was 12, I was all about henna and temporary tattoos. When my parents and I would vacation in Mexico, I would get those string wraps in my hair and then visit the airbrush-tattoo parlor for something. A butterfly on my arm. A heart on my ankle.

In the 90s, much like now with sponge-on metallic tattoos, temporary tattoos were all the fashion. Maybelline made this liquid temporary tattoo ink in different colors that came in a bottle like liquid eyeliner, complete with fine-tipped brush. I had several of those. Then I bought a body-art stamp and body-ink pad — a small pepper I’d always add to my shoulder when it was summertime. #HotTamale My parents (well, my mother) even gave me a henna kit for Christmas. They seemed to have no beef with the prospect of their daughter rocking some body art… as long as it was temporary.

Maybe this was just a phase, they thought. She’ll grow out of it. She’ll never get behind the idea of having to commit to one of those butterflies forever and ever…

One could argue that I did indeed grow out of it. Eventually I stopped adorning myself with things that pressed on and washed off. In college, I had a few friends who did that stereotypical college thing — get plastered and then get terrible, terrible, terrible tattoos. That was a bit of a turn off. So I quieted that desire to get ink of my own.

Then I turned 30, and in a rosé-dazed moment I made a deal with a friend that we would get tats together before the end of the year.

“You know, you could just get a custom designed bracelet,” a friend witnessing the pact suggested as a less permanent alternative.

For the last few weeks, I’ve been working my way through the sheets of temporary ink, designed for teenagers and purchased at Claire’s. I have a hidden pintrest board where I’m collecting line drawings that suit my vision. The temporary tattoos in more visible spots, like my forearm and wrist, have been met with universal enthusiasm. My new assistant has even come up with a handful of tattoos all members of #TeamGallery can get together – “we can each get one of the women in Picasso’s Demoiselles D’Avignon! And then when we stand next to each other, we’ll be a masterpiece! Or you can get a hammer, and we’ll each get nails!” 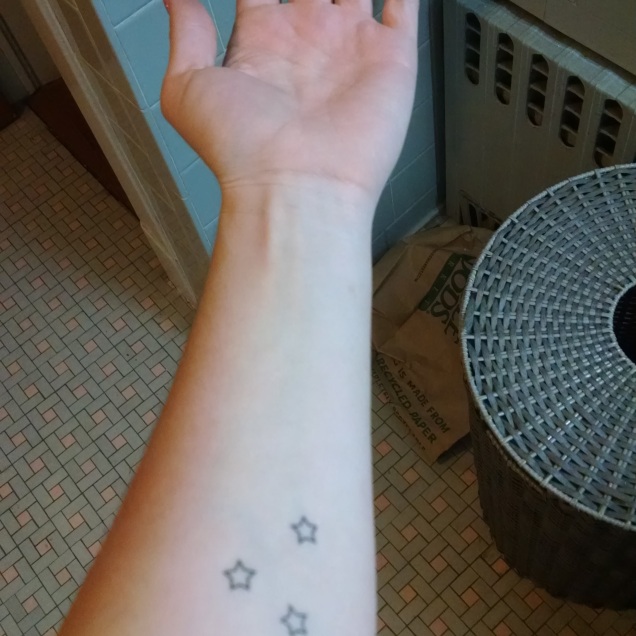 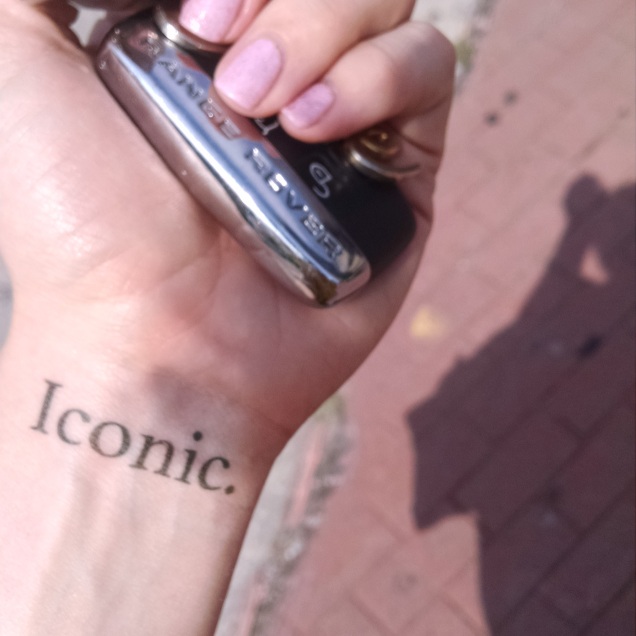 a few of the temporary tattoos I’ve been trying on

I’ve listened to the stories and meaning people imbue into their ink. People with tats get incredibly excited when they hear someone is thinking of getting their first. I’ve picked up willing moral-supporters who will go with me when I get mine done. I’ve racked up a long list of artists I should work with. I’ve heard people tell me they’ve made their appointments for laser removals. I’ve shared my own idea with people, including my mother, who said: Aww, that’s nice (it’s about my family), but it could be ugly. Can’t you come up with something better?

All of this sounds like I should be leading to an ending of this post where I share a photo of my new tattoo. I haven’t quite bitten the bullet yet. I’m getting there. In the meantime, I still have a sheet of temporary tats to work through…