As he placed the bowl of strawberries and a plate of fresh mozzarella in front of me, I thought: we’re a total cliche.

The plan had been to meet at his place for a rooftop drink, then grab dinner and the new Woody Allen flick. 45 minutes to get all dressed up, and we didn’t even make it to the club… Instead of dinner and a movie, we were sitting in his kitchen snacking on bits of things he’d picked up earlier that day at the family-owned Italian market around the corner from his one bedroom flat on the top floor of a Brooklyn brownstone. I was in a gray undershirt he’d pulled from a pile of recently washed leisure cloths. He sported a pair of boxer briefs. It was the summer after all, and central air is a luxury not found in pre-war residences.

“You should come back next weekend,” he said. “During the daytime. We’ll shop the corridor of old family businesses my grandmother used to frequent, and then we’ll cook dinner.”

A week later, we did just that. Standing in his small kitchen, chopping tomatoes and swapping family sauce secrets, and pausing from the chore of cooking every so often to dance to the silence between tracks on the playlist, we were completely apart from the world. We were neatly  and romantically tucked away into a bubble of domestic bliss. As he cracked open a mediocre bottle of wine (a gift from his landlord) and as we shared the most tasteless bowl of rigatoni I’d ever concocted, I thought: we may not cook well together, but this feels good. This is what I want.

It turned out it was what he wanted too. As we put away the dishes, he told me he couldn’t see an ending for us. Perhaps, we’d found the one?

These are the kind of tender moments from relationships past that I bury in the recesses of my memory as I move further away from them, both chronologically and emotionally.

Two years later, and a few hours after diner at a friend’s flat, these vignettes, and ones like them, resurfaced. Over a home-cooked meal of a different nature we had talked about what constituted a “grown-up” relationship, and what he wanted/was ready for now — he painted a rather domestic scene of shared nights in, conversation exchanged over a bottle of wine, etc.

This didn’t surprise me. In my experience, most of the men I dated moved from going out to staying in as soon as I gave his apartment a passing mark. For me, this turn inward was often a point of contention. 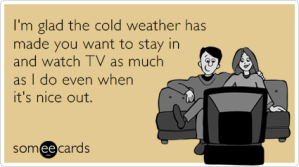 I am almost stubbornly independent. Personal space and alone time are precious, not commodities, but necessities for me. In a similar vein, while I fully embody the home-maker sign of the zodiac, my romantic search has been motivated by finding an activity partner. I’m an adventurer, and when asked when I’m looking for, I usually choose “someone to go out with” rather than “someone to come home to.” Spending our nights together on the couch didn’t seem domestic, it seemed lazy. Expecting I would spend my weekends at his place, on his couch, didn’t seem domestic, it seemed invasive and possessive.

Opening up my mind’s vault to those scenes was revealing. That my most treasured memories from broken romances revolved around a pseudo home life was at first disturbing. I was forced to admit to myself that my favorite stage in a relationship is the part when we’re okay with looking inward, when we’re okay being more home-centric than out and about. I haven’t decided if I have any profound take away from this realization yet — perhaps I have a more focused idea of what I want for myself? Maybe. I know I want to strike a balance between being a nesting pair and a social duo. And what I also know is that I haven’t made finding Mr. Right any easier through this confession — it’s far easier to find someone you can run with than to find someone you want to sit still beside.