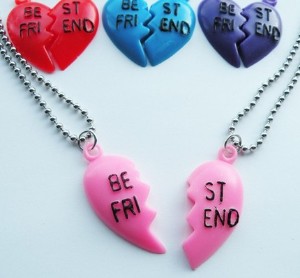 The worst break-up I ever survived was not with a boyfriend. It was with my best friend.

When I got my college freshman room assignment, the first thing I did was shoot an IM to my teammate, Suki. We were only slightly better than acquaintances, but we lived in the same area, trained at the same fencing club, and were both going to be spending our next 4 years at Columbia together. Great news! We were assigned single rooms a floor apart. We spent our summer preparing for college life by becoming bosom buddies. By the time orientation week started, we were thick as thieves, bonafide best friends.

As the year unfolded, our bond as friends grew stronger. There were few things we did apart. This was our first big mistake. We were always invited to things as a set, and when only one of us were invited to things, we’d usually bring the other. While we were each on different academic courses and had a handful of friends that didn’t overlap, for the most part we were peas in a pod, attached at the hip — one person to the majority of the outside world.

Nothing could possibly come between us. But 19 year old girls can let anything come between them, and in our case, it was 2… make that 3 boys.

What exactly happened over the course of a year and half is less important than the fact it culminated in me calling her a slut, she locking me out of our shared dorm room and both of us flushing our friendship down the toilet. She had picked boys over our friendship while putting other relationships at risk. I take loyalty very seriously. There was no option for recovery.

We had timed our break-up well — a week before reading week, 2 weeks before finals, and a month before we called it quits for summer recess. We lived together, but she had an upperclassman friend who would let her crash at his place on week nights. I’d go home on the weekends. Without coordinating it face to face, we had worked out how to avoid each other.  There was a mural on the wall behind our beds — something we had started working on one sleepless night when we didn’t feel like studying but never really finished — I took a sponge to it.

I sat in a kind of quiet depression through that summer. I was fragile and jaded. I had confided in her in a way I had never confided in someone before — she knew all my secrets. How could I trust anyone — friend or lover — again? I lashed out at friends that tried to push us back together. Perhaps a few other relationships fell by the wayside. The collateral damage was almost too large to measure.

It is a truth universally acknowledged that 9 out of 10 boyfriends become ex-boyfriends. But best friends, those are supposed to last a lifetime… so when best friendships come crashing down, we’re left feeling abandoned, betrayed, and wounded in a way no significant other can ever effect us.

Of course, a decade later you get the benefit of saying “things happen for the best.” And for us, the end of our friendship was probably the best thing that ever happened to us both. She found true love outside our complicated polygon. We found our unique identities. I moved on, and while I’m more cautious about who I let into my life, years later, I learned to trust again.

2 thoughts on “The Worst Break-Up Ever”