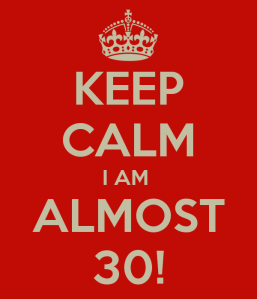 Today, I woke up a year younger. Somewhere between 27 and 27.5, I decided I was 28. I don’t know how it happened, or why it happened, but for the last few months I’ve been referring to myself as “almost 30,” with a slight lean towards 28 when asked to be more specific. I was filling out a form for work when I suddenly remembered, I’ve got a few months to go.

Where this age-identity crisis stems from is hard to pinpoint exactly. It might be because I have some friends in their late 30s who have embraced the identity of “almost 40” and it skewed my own sense of age.

Or maybe it’s because I thought 28 made me sound more legit as a professional. I’m working with a curator, who despite being brilliant,  lovely, and one of the most receptive and collaboration-minded people I’ve ever worked with, has a penchant for condescension when it comes to me and my age. I can’t say I’ve ever been as aware of being in my 20s as I am when I’m on a studio visit with her — her intention is not to be demeaning every time she references my relative youth in front of the artists, but all of a sudden I feel a need to assert that I’m not fresh out of college.

I’ve even gone so far as to let my gray hair show. Hey, I learned to type on a typewriter, for Chrisssake.

Then again, I’ve always been suffering from an age identity crisis.

“You should be dating someone who is at least 21.”

So declared my South African god father at my 17th birthday dinner.

The entire table, including my parents, nodded adamantly in agreement. It’s true what they say: You don’t argue with the God Father.

I had just graduated from high school and had barely had a chance to get my head around the fact that, in a few months, I’d be living in New York City and fully immersed in that phase of life called College. I was a kid, and I knew it. But the general consensus at the time, and one that perpetuates among my friends and family to this very day, is that I’m older than my age.

I don’t really know what that means, but I do know that it took a long time for me to be able to relate to people “my own age” — I always preferred the company of people with a decade or 3 on me. Their stories are always better.

I’ve been characterized many a time as an “old-soul” — a characterization that is frequently undermined by the fact that I still, on most occasions, look like a 16 year old… despite my gray hair.

“Where are you going to college next year?” asked a teenage girl in the locker room at fencing practice.

“Yes, and that’s why my body is held together with kt tape. But at least when I go home tonight I can have a cocktail. You have to stick to soda pop.”

And so, it seems, there is no end to this age identity crisis.

One thought on “Acting Your Age”