I once made the mistake of exchanging CDs with a guy I was seeing. I loaned him Bob Dylan’s  “Blonde on Blonde” and he loaned me “Highway 61 Revisited.” It took some convincing, but eventually he saw the light — Highway 61 may have its historic significance, but Blonde on Blonde boasted the catchier tracks.

Before I knew it, we were serenading each other with “I Want You” and stomping along to “Rainy Day Women #12 & 35” as we cooked dinner in his kitchen. While we saw each other, we shared many things, including a mutual distaste for the Red Sox and a mutual preference for elaborate home-cooking, but nothing was more “ours” than Bob Dylan.

At the time, it was great. Every time I’d start to belt out “Subterranean Homesick Blues,” I’d think of us and smile.

We stopped seeing each other. 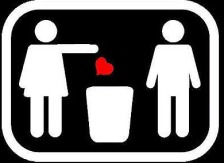 When a relationship ends, there’s always the post-traumatic exchange of goods. Things loaned and borrowed, things left behind at apartments or in cars — all things that have to be returned in an awkward and loaded hand-off. But let’s face it, ridding yourself of his Michigan sweatshirt and reclaiming your “Blonde on Blonde” from his CD rack is relatively easy. I’d even go so far as to call the act empowering. The problem is ridding yourself of the intangibles.

Back at home, I held my Dylan CD in my hand and looked at it with distaste. I knew I wouldn’t be able to listen to it  anytime soon without flashbacks to our sing-alongs and cook-ins. Appropriately, I recalled a song Joan Baez wrote about her relationship with Bob Dylan in which she sings: “We both know what memories can bring/ They bring diamonds and rust.”  I was having a hard time finding any diamonds amongst the items I’d reclaimed from his place and the memories that lingered from our months together. Worse of all, Bob Dylan was covered in rust for me and I was annoyed at my ex for stealing both my heart and my favorite musician.

A broken heart mends in time, but a broken CD… well, the only place for that is the trash.

75 thoughts on “You Borrowed My Bob Dylan CD and Stole My Heart. I’d like them back now, please.”