When I shared an article from the LATimes with the title “Are Fans Right to Be Upset that Serena Williams Beat American Pharoah for SI Sportsman of the Year” on Facebook, it launched an unnecessary comment-box debate with a 19-year college male. I don’t really support facebook as an appropriate space for “discussions,” but there are certain buttons you don’t press with me… like telling me to “keep your feminism in check.” Enter the dragon.

I call the debate “unnecessary” because by definition, an animal cannot embody sportsmanship. A horse is not a person and, as one of my friends pointed out, it is dehumanizing to even entertain a comparison between American Pharaoh and Serena Williams. Any back-and-forth should have ended with that simple reality.

But it didn’t. And the exchange that followed highlights a few important truths about institutionalized sexism (racism too, but I’m only going to tackle one mountain at a time) in sports (and beyond.)

The Sports Illustrated Sportsman of the Year was created in 1954 to  recognize “the athlete or team whose performance that year most embodies the spirit of sportsmanship and achievement.” 75 people have received the award since then, 10 are women, and only 3 individual women athletes have won the award outright (as in, haven’t shared it with men.)

57.3% of the winners represent the major US domestic male pro and college sports. Is that inherently a problem? Nope. Baseball is America’s sport. Football is a multi-billion dollar industry. But none of the basketball recipients have been college or pro female athletes. Are the female athletes not posting impressive numbers? If there’s a LeBron there must be a LaBron… No one watches professional women’s basketball? Why is media attention a criterium for selection?

Do I have to ask the Linda Nochlin artist question in sports? Why have there been no great sportswomen?

You know the answer is no.

In 1980, the Miracle US Men’s Hockey Team won the Sportsman of the Year award. Their legendary win over the Russian team became symbolic of the larger political-economic battles of the Cold War. It’s a great story. Meanwhile, the US Women’s Hockey Team has won 15 World Championship titles. In 1998, they won a historic gold at the Olympics… the first time Women’s Hockey was ever contested at the games.  In 1998, the award was shared by Mark McGuire and Sammy Sosa… both tested positive for doping. 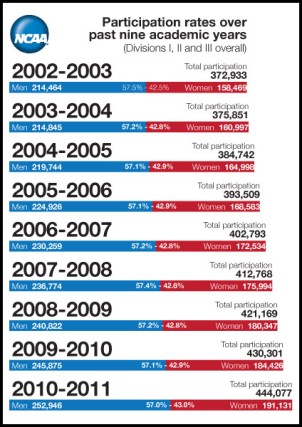 It’s true there are more male professional sports than female professional sports,  and of the 23 million who read SI, 18 million are men… so we can give the editorial board a bit of leeway… the split doesn’t have to be 50-50, men to women recipients. But let’s remember, women have been able to compete in the Olympics since 1900, and as of the 2012 London Games, represent more than 44% of the field. 191,131 women compete on NCAA teams (43% of all NCAA athletes.) If we need a model and are using the Olympics, the highest level of competition for any athlete, then 13% is just too low…

In 2011, Pat Summit was the all-time winningest coach in NCAA Basketball history. She shared the award with Mike Krzyzewski, a veritable legend, but holds the most wins in Div 1 men’s basketball, only.

You might argue that men’s basketball has a longer history or more teams. Lame. Stop. Just stop.

So with the exception of Pat Summit and the 1999 US Women’s Soccer team, the remaining 8 women all won individual titles at an international, World Championship, or Olympic level (let’s be more specific — 3 are tennis players who held multiple Grand Slam titles, 2 won historic Olympic Gold medals, 1 was a golfer who held 6 major pro titles, 1 held multiple World Championship titles and records, and 1 was a Pan-Am games gold medalist.) But let’s not discount the US Women’s Soccer team — they won the World Cup in 1999, soccer’s main stage. (An aside: Do you know when the men’s team had their best performance in the World Cup? 1930. Oh, and they were 3rd.)

And what about Serena? She also held all four major titles in 2002-2003 and broke all sorts of barriers. In 2003, the award was shared by 2 male basketball players.

Do I need to highlight again the percentage of male recipients who were on teams in sports whose “World Championships” are really only domestic championships?

So these numbers beg a handful of questions…

First, are men and women held to the same standards when the editorial board sits down to make their selection? How much does readership play into selection? If readership plays a major factor, is the award a legitimate representation of the best sportsperson across sports that year? Or is primarily marketing tool for the magazine? Is the SI editorial board making a concerted effort to find viable female candidates and giving them equal consideration? Does the award represent, not the readerships’s demographics, but the sport world’s demographics? If it doesn’t, why? Is there a reason why SI doesn’t recognize both a man and a woman every year?

The question is not, well what woman athlete should have gotten it over a male athlete? The question is, is the SI Sportsmans of the Year relevant, and what does its awarding say about how we value female athletes?

The lopsided distribution of the SI Sportsman of the Year is symptomatic and representative of continued inequity and sexism in the arena of professional (and amateur) sports. Serena Williams still makes less than her male counterparts. It wasn’t until 2012 that women competed in every sport on the Olympic program… and on it goes.

The fact that a college-aged male in 2015 would think that the SI numbers and the horse vs. human question isn’t indicative of a problem  indicates a pretty big problem…

Is SI a sexist publication? It’s hard to say no when it purports to be a sports magazine but it’s biggest issue features swim suit models... in the tiniest swimsuits possible…. and when the recipients of it’s biggest award don’t accurately represent the demographics of the field it claims to recognize.

All that being said, Serena Williams is an icon, a role model, a consummate professional, and a classy sportswoman. She embodies all that is great about sport. Her crown has far more than 3 jewels in it…