The first thing I did in the New Year was pay my American Express bill (well, technically it was the second think I did, after picking up the broken champagne flute and depositing the empty bottles of Veuve in the recycling.) Next, it was on to the gym. When I got home, I baked butter tarts and cheese biscuits, then googled “Oscar Isaac relationship status.”

If these acts kicking-off my 2016 are in anyway indicative of some underlying, motivating New Year’s resolutions, those resolutions would have to be:

If I really think about it, I’m fairly confident I can achieve all of these in the next 12 months (even if Nos. 1 and 3 seem in complete competition and I didn’t get a FitBit for Christmas). #4 seems particularly obtainable…

On Wednesday, the last day our offices were open in 2015, my boss called to riddle off a few final requests and bid me an enjoyable long weekend.

“Well, I certainly hope so…” I immediately envisioned the upcoming 12 months — a long list of projects which forecasts a relentless, Sisyphean push uphill scrolled across my mental computer screen. I think I threw-up a little in my mouth. “Yes. I mean, yes. Of course it will be a fabulous year!” 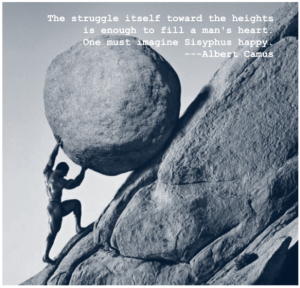 The changing calendar triggers a flurry of contradictory feelings. Nostalgia — for the year closing and years past. Excitement — the chance to start afresh and the promise of new adventure. Fear — a lot of life happens in a short period of time; can I handle what lays ahead?

“Your Year Ahead” emails, complete with horoscopes, exercise plans, shopping “musts,” and travel suggestions start hitting your inbox on Boxing Day. If you hadn’t had a chance to think about what’s next, you certainly are now.

Resolutions emerge, our proposed answers to the question: how will I “show up” this year?

2015 was pretty fabulous year — the first 7 months were loaded with firsts, with successes, with travel, and fetes. In turned 30 and with a new decade came the summer — a slower paced season which brought changes, more travel, and a little illness. Fall was a mixed bag, highlighted by still more travel, but otherwise a slog. The year closed with the flu, but great family and friends. In general, I felt that I was always running to catch up and to get ahead. The changing calendar was the first time I had a chance to look back and enjoy, because from the moment the datebook read 2015, I’ve been looking ahead… into March 2016, September 2017, February 2018… If only I had a crystal ball.

There is a lot to look forward to in the upcoming months — exhibition openings, a wedding, arty parties, travel, an extra week of paid vacation — little exclamation points on my calendar that await sentences to fill the lines between them. Generally, I walk into the pages of this new year with excitement. Who doesn’t love the start of a new story (especially when Oscar Isaac is cast in the cinematic adaptation…) Let’s leap.